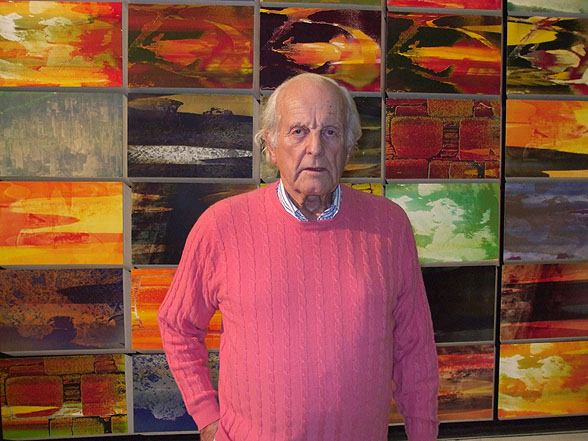 Frazer Dougherty with his Earth Cores. Photo by Joe Strand


East Hampton - Frazer Dougherty, well-known businessman, auteur, and social presence in the Hamptons, threw a solo exhibition, “Earth Cores”, and celebration at East Hampton Studios on Saturday, Nov. 10, from 5 p.m. to 10 p.m. in celebration of his artwork spanning over 40 years.

Born in 1922 in Wyncote, PA, it was during his six years as a pilot flying B-25 planes in New Guinea during WWII that he first began photographing earth patterns. Additionally he helped design, test-fly and develop the world’s first (FAA approved) auto-plane, the Airphibian. During this period of time he began experimenting with half-tone screens of aerial photographs, and created seragraphs, photographs, films, and silkscreens. His prior exhibitions include the Benson Gallery and the FAR Gallery. This exhibition includes all work from, during and immediately following his military career up through 1983.

What is the time period that tonight’s work represents?

FD: “This is almost everything I’ve done in the art world, including some films. I started after the war, in the late 40s, early 50s as a pilot looking out the window and seeing patterns that I photographed. I kept doing that and most of these pieces are what I call ‘earth cores’, that show patterns of sea, surf and land".

Is tonight’s exhibition a full representation of archival pieces?

FD: “It’s everything I have that was either framed or unframed. I have some paper pieces here for people to leaf through".

Is there a reason why you have not pursued your photography since around 1983?

FD: “I was building this place (East Hampton Studios) and LTV. I was working 70 or 80 hours a week, and there wasn’t much time left to silkscreen".

What genre and/or medium does this exhibition represent?

FD: “Rather than show just a photograph I decided it would be more interesting to do silkscreens of the photographs. In essence I could then let a color run in or a color run out, and that became interesting to me in the way that it is the same view under different lighting circumstances and even different seasons. Tonight’s work is all silkscreens, and a few little drawings, and films. Since I photographed from the air looking down at the patterns on the ground, I thought of them all as earth cores, and that is why I called them ‘Earth Cores’, which is why they are all on these truncated platforms".

Did you pursue this method of photography after the War?

FD: “Well, I was still flying after the war and helped design and build a combination automobile/airplane right after the war for ten years or so, and flew out of Danbury, CT, so that was more flying, and also even during commercial flying, I would shoot out the window; there were no rules against it then".

Do you have a fondness for a particular camera?

FD: “I had a little Nikon that I used for the most part".

Do you miss the art process or the flying more?

Among the numerous pieces there is a three panel work entitled “Selma”, could you discuss this particular piece?

FD: “I was on the Selma March, and I had a bunch of cameras, so I ran around acting like a camera person. Martin Luther King was a hero of mine, and I was at the Washington March, and I was at his funeral, and had done a lot of things with him. I have a whole series of heads that I did, but I screened them late so I only have three up tonight, but there is a whole series I could do and should do".

What was the impetus or idea to do this particular exhibition?

FD: “In the early days of photography from an exhibiting point of view, there was no market for photographers, now there is, but then there was not, so I wanted to go and turn it into an art form, or another dimension of an art form, and the multiples, as you can see, are grouped together. The story goes if three people looked at an accident and wrote down what they saw, they’d all write down something different, so this is sort of down that road".

Is there anything about this exhibition that you are finding to be nostalgic or melancholy?

FD: “I like them [art pieces], the 100-foot long silkscreen was interesting to me for me to do because it was a challenge, I did it on three different materials, and while I had that screen on the table, I would do individual screens also, so it’s a 300-foot long job, and a bunch of prints. That’s a Greek panorama, and I spent a lot of time in Greece".

Is that a particular part of the world you are fond of?

Do you think you have any advice for struggling artists nowadays?

FD: “I think the main thing for anybody is just do it. You have to get in there and find out if you like it, and if you do, put it aside, and if you don’t, throw it away".

Are there any particular artist(s) you have been fortunate enough to work or collaborate with, or just simply admire?

FD: “Well, that’s a difficult question. I have a few pals that I worked with, Arnold Hoffman, is a silkscreener, and he and I collaborated a bit; Jimmy Ernst, who was next door here - I’m not an artist like many of the artists out here and that may be because I dropped it to run the public access television".

Have you missed it?

FD: “Yes, but it’s hard work, and you are working for yourself".

Are there any local artists here in the Hamptons whose work you have taken particular note of?

FD: “Again, I haven’t really been deeply involved in the art world since 1983 - another form of art - LTV, and the production of that, and the building of that, and this place [East Hampton Studios], and the sound stage".

Is this the first time you have shown and exhibited your entire collection in the same space?

Are all pieces for sale?

FD: “Yes, but that’s something I have to do, is finish the price list".

Back to home of Airphibian